FEATURE STORY
The 150th anniversary of the U.S. Civil War is a time to reflect on four years of fighting, North against South and sometimes brother against brother. The bloodiest of the fights occurred in July of 1863 on a small battlefield near Gettysburg, Pennsylvania. The Feature Story offers an overview of the divide between the Union—those states that wanted to keep the country united—and the Confederacy, those states that wanted to secede from the United States of America. The events that led to the Battle of Gettysburg, a turning point in the conflict, are reviewed. READ MORE

NEED TO KNOW
The Need to Know section offers a detailed account of the events leading up to the Battle of Gettysburg, the officers who commanded troops on each side of the conflict, accounts of skirmishes within the battle, and the strategies of the armies involved. In addition, a number of biographies, images, maps, primary documents, and other reference entries offer additional information on the actors in this bloodiest contest of the Civil War. READ MORE

EXAMINE
The Examine section of this History and the Headlines encourages students to explore newspaper accounts during the time of the Battle of Gettysburg from both the Union and Confederate perspectives. The Examine also includes a link to a longer version of this lesson plan, which is located on ABC-CLIO’s Support Center. READ MORE

Be sure to check out these other library resources:

Since 1950 Nevada has seen a lot of growth. In April of 1950, population total was 56,515 people. Sixty years later population had grown to 2,700,551 with 94% living in urban areas. In 1950, urban population was 55.9% to rural population of 44.2%. This report provides 2010 Census and historical comparisons of the population and housing unit counts over 60 years. It also provides area measurements and density. The user notes section documents geographic changes over the past decade.

Tell us what you think!
During The Big Library Read, we will post discussion questions on Facebook and Twitter, so be sure to follow us and Michael Malone and be a part of the dialogue. In addition, there will be a worldwide conversation using the hashtag #BigLibraryRead, so tweet your thoughts often on Twitter.

The book’s publisher, Sourcebooks and OverDrive, will be hosting a live Facebook chat with author Michael Malone, on Thursday, May 23 at 8pm ET enabling readers to have their questions answered in real time.

If you would like to participate in this chat, please send questions during the week to us on Twitter (@OverDriveLibs) and stay tuned for more information. This program is the first of its kind, so head to our eMedia Catalog  to check out the title and join the #BigLibraryRead conversation! 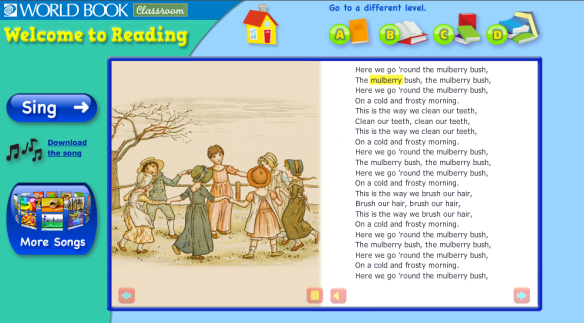 Here We Go ‘Round the Mulberry Bush

and there are lots more songs in Early World of Learning!

The new Big Library Read initiative is a joint effort between Sourcebooks,
OverDrive and public libraries worldwide.  It’s a unique program (May
15-June 1) designed to unite the world in reading the same eBook title
at the same time and to demonstrate the influence library
patrons (you) can have. We already know the power of libraries – this is a
unique way to let the rest of the world know!

Excitement is building….since last week, over 2,000 libraries have
opted-in to participate in this event from 8 different countries – on 4
continents! Las Vegas-Clark County Library District, North Las Vegas
Library and Boulder City Library are three of those libraries!

The eBook for this pilot is Four Corners of the Sky (click to get your copy of the eBook) by Michael Malone.  Thanks to the generosity of Mr. Malone, every member of the community (with a valid library card) can read the eBook at the same time at no cost to the library!

If you don’t want to read the eBook version you can still participate with the print version! There are limited copies of The Four Corners of the Sky (click to reserve the print copy) available which you are welcome to begin reading now.