1. Which 1942 animated feature film told the story of a young fawn whose friends included Thumper and Flower?

2. In “The Wizard of Oz”, Dorothy said to her dog “I’ve a feeling we’re not in Kansas any more!” What was the name of her dog?

3. Leo the lion roars at the beginning of each movie made by which film company?

5. What was the title of the 1995 film adapted from Dick King-Smith’s novel “The Sheep-Pig”, about a pig who discovers it can herd sheep?

6. “Ring of Bright Water” was a 1969 film based on Gavin Maxwell’s life with which kind of animals?

8. “National Velvet” was a 1945 film starring Elizabeth Taylor in which Velvet, a butcher’s daughter, wins what in a raffle?

Play Step Up to the Plate by answering this question:

Who are the only two pitchers to win four straight Cy Young Awards?

Find the answer on here on the Baseball Resources page under Homework -Tutors.

Just in time for Summer Reading, Novelist PK-8 is just for kids in our Ducky Dreams Big and Dream Big Summer Reading programs. You can use Novelist PK-8 to find books to read. Into sports? Enter the word sports and select your age group. Fiction and NonFiction books are suggested. You can limit your choices between Fiction and NonFiction books, genres, like mysteries stories, comic books, etc.

Know what’s really cool? Find a book you want to read and click the

Check the Library Catalog link, to see if the library owns the books and if it’s available and where!

Engineering sounds so BORING. No one really wants to say “Yeah – I’m an engineer…” But appearances can be deceiving!

Who designs new roller-coasters? Who creates the most challenging skateboard tracks? Who creates the newest phones, video players, and computers? You got it – engineers! Plus, they’re ALWAYS in demand. If you’re a good engineer, you probably have a job.

How do you become an engineer, and what sorts of things can you do?

Have you always wanted to learn another language? We make it easy with Powerspeak Languages!  It doesn’t just give users words to memorize—it immerses you in the language and the culture. Whether learning a new language for business or pleasure, being a global citizen means knowing how to communicate beyond ordering a drink or asking for the location of the train station. The Powerspeak Languages online learning program provides a rich language learning experience that uses audio, video, and interactive lessons to take you beyond rote memorization to a deep understanding of how to communicate with confidence in a new language.
Each language features video instructions, tips, summaries, and guidance from a knowledgeable native speaker, called the Virtual Coach. This coach also offers encouragement and shares interesting facts about the language and the speakers.
Video, audio, and interactive activities include:

View this video on how to get started learning:

View this video to learn how to use Powerspeak Languages: 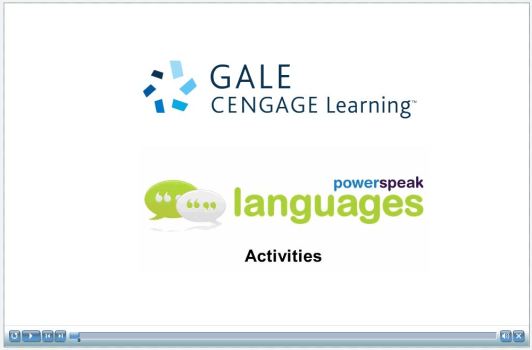