1. How many days does February have in a leap year?

2. Which famous city landmark in Paris was erected in the Champs-de-Mars for the Paris Exhibition of 1889?

3. In Roman numerals, what number is represented by the letter V?

4. Which member of the girl group Destiny’s Child had the surname “Knowles”?

5. Which author wrote “Adam Bede”, “The Mill on the Floss” and “Silas Marner”?

6. The title “dauphin” was formerly used for what relation of the king of France?

7. Which Spanish painter was one of the most notorious surrealists and developed a repertoire of striking, dreamlike, hallucinatory images – distorted human figures, limp pocket watches, and burning giraffes?

8. Is a dory a kind of antelope, butterfly or fish?

9. In which year did the USA enter World War I?

10. Is Beethoven’s 6th Symphony known as the Choral, the Pastoral, or the Unfinished?

Provided by The Pulse and Gale’s Health and Wellness Resource Center:

Promoting it will be easy with these free resources and with information from Gale Health and Wellness Resource Center:

From the publisher: “In America after the Second Civil War, the Pro-Choice and Pro-Life armies came to an agreement: The Bill of Life states that human life may not be touched from the moment of conception until a child reaches the age of thirteen. Between the ages of thirteen and eighteen, however, a parent may choose to retroactively get rid of a child through a process called ‘unwinding.’ Unwinding ensures that the child’s life doesn’t ‘technically’ end by transplanting all the organs in the child’s body to various recipients. Now a common and accepted practice in society, troublesome or unwanted teens are able to easily be unwound.

With breath-taking suspense, this book follows three teens who all become runaway Unwinds: Connor, a rebel whose parents have ordered his unwinding; Risa, a ward of the state who is to be unwound due to cost-cutting; and Lev, his parents’ tenth child whose unwinding has been planned since birth as a religious tithing. As their paths intersect and lives hang in the balance, Shusterman examines serious moral issues in a way that will keep readers turning the pages to see if Connor, Risa, and Lev avoid meeting their untimely ends.”

From the author’s website: “Anna is not sick, but she might as well be. By age thirteen, she has undergone countless surgeries, transfusions, and shots so that her older sister, Kate, can somehow fight the leukemia that has plagued her since childhood. The product of preimplantation genetic diagnosis, Anna was conceived as a bone marrow match for Kate – a life and a role that she has never questioned… until now.”

The giving tree is a classic children’s story that demonstrates the same kind of self-sacrifice that organ donors make. It also ties in Earth Day (April 22nd) and Arbor Day (April 27th) :

Find a local agency to partner with, a speaker, or other local resources here:

Use these free publicity resources alongside your library’s April programming information – newsletter, blog, posters, or fliers – to promote National Donate Life Month at your library.

Some time ago, we had brainteasers about the letters A, B and C. Now here’s a quiz where the answers are all words or phrases that start with the letter D. Need help? Use Credo Reference Online.

1. What is the surname of the American film actor who starred in “Good Will Hunting”, “Saving Private Ryan” and “The Bourne Identity”?

3. “Disco” is a shortened form of which word?

4. Which country is bounded to the north by the Skagerrak, east by the Kattegat strait, south by Germany, and west by the North Sea?

5. Which disease can be caused by reduced production of the hormone insulin, or a reduced response of the liver, muscle, and fat cells to insulin?

6. What surname was used by the singer/songwriter who was born Robert Allen Zimmerman in 1941?

7. Which 1963 film had the sub-title “How I Learned to Stop Worrying and Love the Bomb”?

8. What is the English name for the island off the northeast coast of French Guiana which was a penal colony notorious for its terrible conditions? Alfred Dreyfus was imprisoned here.

9. Which satirical romance by Miguel de Cervantes is about a gentleman who sets out on his wanderings accompanied by his servant, Sancho Panza?

10. What is the name of the former capital of Tanzania, which was also the capital of German East Africa and of Tanganyika? 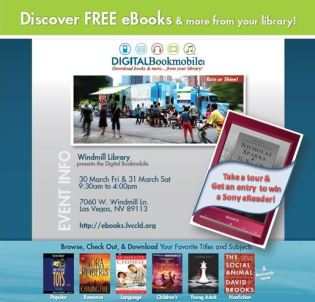 The Digital Bookmobile is coming to the wild west!

The Digital Bookmobile is a 74-foot high-tech tractor-trailer where you can experience interactive demonstrations and explore the Library’s downloadable eBook, eAudio Book, music and video collection. Come on out and take the tour, it’s free and fun! Everyone who takes a tour of the Digital Bookmobile will be entered into a drawing for a Sony eReader.

When will the drawing for the Sony eReader happen?

The drawing will be at 4pm Saturday March 31 at the Digital Bookmobile. You need not be present to win.  The winner will be notified within 72 hours.

Can kids tour the Digital Bookmobile?

Yes! It’s a great way to introduce kids to the joys of reading, either it be in print or on a cool reading device.

How many entries can I have?

There is only one entry per person and yes you have to take the tour!

How can I get the Library’s eBooks & eAudio Books?

You will need a library card in good standing and find, checkout and download the books via our eMedia Catalog.

Can I get a library card the day of the event?

Yes. Just bring your picture ID and proof of address. Kids, you will need one of your parents with you to get a library card.

Will there be other programs happening at the event?

Yes! In addition to the Digital Bookmobile, there will be a book sale, storytimes for young people, and free give-aways.

The 20th century was a time of many positive events, discoveries, and achievements. This selection can stimulate discussion about what makes something historic or world-changing and which contemporary events might qualify for a similar list in the future.

1. Computer revolution – The computer revolution, sometimes called the information revolution, resolved an age-old search by humankind to invent a machine that could perform mathematical and logical computations in order to help people solve complex problems.

2. Apollo 11 – Apollo 11 was the first successful space mission involving a manned landing on the moon.

3. DNA – Found in the cells of all living things, DNA (deoxyribonucleic acid) is a chemical substance that contains hereditary information.

4. electricity – Though the techniques of generating and using electricity were developed during the 19th century, its use made the 20th century one of astounding technological innovation.

5. television – A television is an electronic device that transmits pictures and sound as electrical waves from one system to another.

9. Moon landing: Buzz Aldrin – Astronaut Buzz Aldrin stands beside a deployed U.S. flag on the moon during the Apollo 11 mission of 1969.

Learn more about these events using the library’s online resources such as U.S. History in Context or Science in Context.